About THE FIRES by Joe Flood

The RAND Corporation had presented an alluring proposal to a city on the brink of economic collapse: Using RAND’S computer models, which had been successfully implemented in high-level military operations, the city could save millions of dollars by establishing more efficient public services. The RAND boys were the best and the brightest, and bore all the sheen of modern American success. New York City, on the other hand, seemed old-fashioned insular, and corrupt-and the new mayor was eager for outside help, especially something as innovative and infallible as “computer modeling.” A deal was struck: RAND would begin its first major civilian effort with the FDNY.

Over the next decade-a time New York City firefighters would refer to as “The War Years”-a series of fires swept through the South Bronx, the Lower East Side, Harlem, and Brooklyn, gutting whole neighborhoods, killing more that two thousand people and displacing hundreds of thousands. Conventional wisdom would blame arson, but these fires were the result of something altogether different: the intentional withdrawal of fire protection from the poorest neighborhoods-all based on RAND’s computer modeling systems.

Despite the disastrous consequences, New York City in the 1970s set the template for how a modern city functions-both literally, as RAND sold its computer models to cities across the country, and systematically, as a new wave of technocratic decision-making took hold, which persists to this day. In The Fires, Joe Flood provides an X-ray of these inner workings, using the dramatic story of a pair of mayors, an ambitious fire commissioner, and an even more ambitious think tank to illuminate the patterns and formulas that are now inextricably woven into the very fabric of contemporary urban life. The Fires is a must read for anyone curious about how a modern city works.

Mayor Mike on The Fires

Mayor Mike Bloomberg says he’s reading The Fires on his iPad (at 2:10): 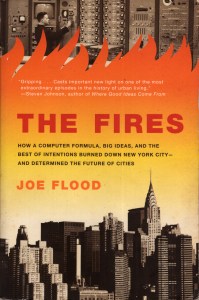